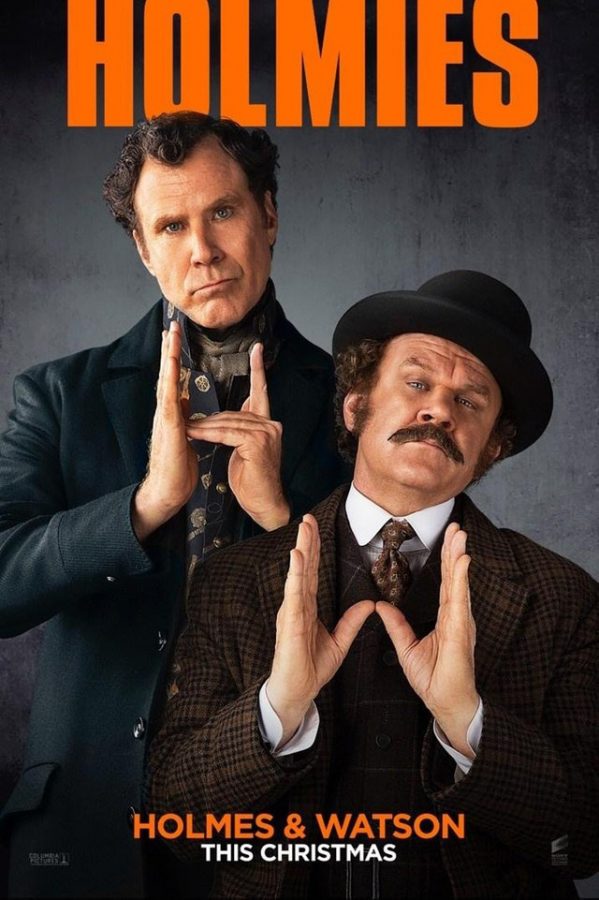 Holmes and Watson is the new-comedy starring Will Ferrell and John C. Reilly. The movie is based on the iconic Sherlock Holmes novels written by Sir Arthur Conan Doyle. In the novels, Sherlock Holmes is a genius detective who is assisted in his sleuthing by Doctor Watson. The novels are written from the perspective of Dr. Watson and recount Holmes’ amazing detective skills and unbelievable solves.

The novels have been adapted in multiple ways, including TV shows, such as “Sherlock” starring Benedict Cumberbatch and Martin Freeman. The novels also popularized detective stories for young adults in the forms of Nancy Drew and the Hardy Boys.

The movie takes a different approach on the beloved classic. The premise of the film is that Holmes and Watson have to prevent an elusive evil super villain from killing Queen Victoria. Throughout the film, the sleuths discover new clues, encounter unexpected twists, and meet interesting people as they attempt to save Britain. However, instead of the normal serious tone Detective Holmes takes, the movie focuses on slapstick comedy. There are outrageous incidents, from the sleuths singing in the rain to almost killing the Queen.

The movie was directed by Etan Cohen, who is best known for writing the scripts to Tropic Thunder, Madagascar: Escape 2 Africa, and Men in Black 3. The movie cost $42 million to make and was filmed in London.

The film is getting terrible reviews, with David Fear of The Rolling Stone writing, “It’s so painfully unfunny we’re not sure it can legally be called a comedy.” Critiques are headlining movie review sections, with articles like “Will Ferrell and John C. Reilly hit career lows in the abysmally unfunny Holmes & Watson” and “Heads Up, My Mom Walked Out Of Holmes And Watson.” Common criticisms are that, being such accomplished and funny actors, audiences were expecting more from Ferrell and Reilly.

Senior Hannah Kresen says, “I haven’t seen the film yet but I’m surprised that it’s getting negative reviews. I love Will Ferrell and have always thought he was funny.” Music teacher and band director, Ms. Jessica Turner, chimes in, “Mary Poppins is definitely better.”

I saw the film and personally, I enjoyed it. The movie is simple and funny. Despite the slapstick comedy, there is still an interesting mystery underlying the humor. The ridiculousness that many are taking issue with is what makes the movie more enjoyable. Ferrell and Reilly have the same familiar chemistry between them that was present in Step-brothers.  For all the cringe-inducing humor, there is even more mystery, lack of plot-holes, and definitely a unique take on the classic. Despite what critics may say, the movie succeeded in bringing a fresh perspective to the novel that has been redone hundreds of times. I would recommend this movie to fans of Ferrell, Reilly, and those that appreciate simple comedy.