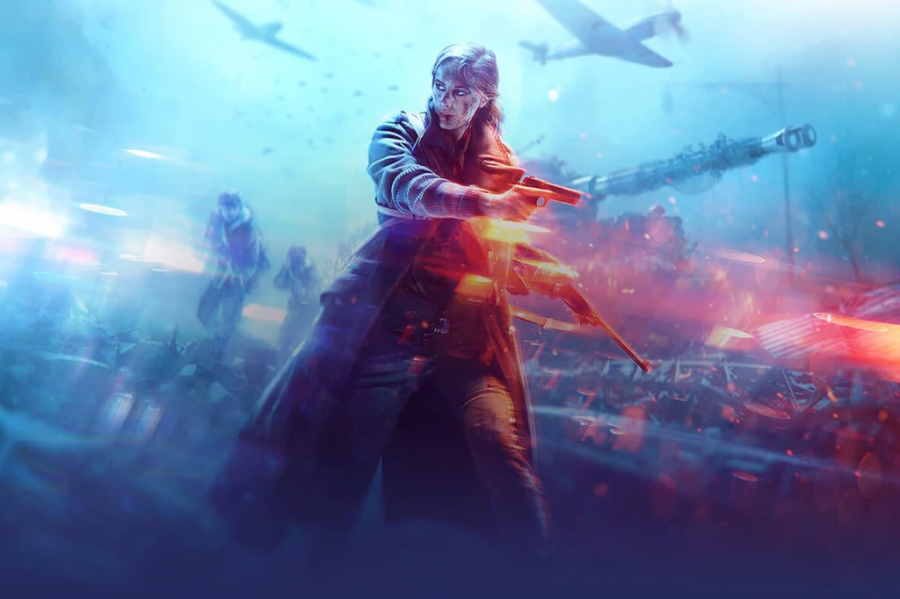 The company DICE, who are responsible for the creation of the video game series Battlefield, have been under fire from critics recently about how they have been marketing their newest release Battlefield 5, as well as lying to their customers about what is in their game. Misleading social media posts and developers blatantly telling lies to their customers were all big mistakes by DICE, and they learned the hard way that customers are not to be messed with.

Historical accuracy has always been a selling point of the franchise, however, DICE ditched this approach in its most recent Battlefield video game. This release takes place during WWII, where the Allied powers fought against the Axis powers. While the game was being produced, DICE released many trailers and social media posts, showing players that this installment would be historically accurate, similar to Battlefield 1 and Battlefield 1942. According to the many tweets, posts, and trailers that DICE had put out on their various social media websites, fans were promised a simulation that would immerse them in the setting of the Second Great War, complete with a thrilling campaign. But when the Battlefield 5 Official Reveal trailer was released, fans were less than thrilled when they were shown a brightly colored, upbeat, “silly” atmosphere complete with many inaccuracies such as British commandos with katanas and facepaint. According to DICE, this was an attempt to attract a broader audience and show diversity in their game. This is not what they promised, and customers did not like being lied to. Outraged fans flooded to the comment sections of the video, spewing their disapproval and unhappiness. Some were mad, but most loyal fans were just disappointed with what they were promised and what they got. It’s clear they wanted an accurate depiction of WWII, not for DICE to give in to the more fast-paced Call of Duty style aesthetic.

One fan showed the trailer to his grandpa, who fought in France. He posted it in the comment section of the reveal trailer for all to see. “I showed the reveal trailer to my Grandad. A man who fought in France. He said… “Is that a female?” “Yes grandad” “Is that face paint?” “Yes grandad” “Does she have a prosthetic hand?” “Yes grandad” “I’m sorry, I didn’t see any women with claws wearing face paint… but I saw a lot of dead men. Is this what people think happened? Because it isn’t.” This is coming from a WWII veteran, and you can tell that he’s disappointed with DICE’s depiction of this time period because of how inaccurate it all is. 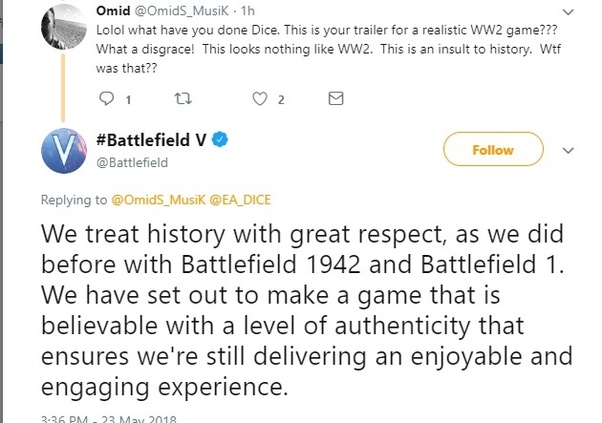 A tweet made by DICE, showing they tried to recover after the trailer was dropped by lying.

Not only were the older generations displeased, but the younger customers, DICE’s main audience, were unhappy as well. During the outcry caused by the fans, marketing and advertising Battlefield became less of a priority for DICE. This resulted in loyal consumers not even hearing about the game when it was released. Jonathan Law junior, Rohin Manohar, a huge Battlefield fan, stated that he didn’t hear much about it before it was released. “I heard about the game’s release weeks after it was actually released and I always knew the day these games would come out but this time was different. I heard from other people who got the game that it wasn’t as good as the previous battlefield games so I’m waiting until it gets on sale,” he said, “but I am a big fan of this game so I will still buy it but I want to make sure I don’t waste too much money.”

Another Battlefield fan, junior Johnny Barile, explains how he had never even heard of the game being produced. “I didn’t even hear about the release of the game before I was asked about it and it is now January 4, 2019. The release was November 20, 2018. You can see how that looks bad for DICE.”