The threat of Ebola encroaching upon the mainland United States has come true as six people contracted the illness domestically while one of the six, Thomas Eric Duncan of Texas, succumbed to it.

Ebola has been transported elsewhere to the United States through places such as Sierra Leone and Liberia, which are overflowing with hundreds of cases of Ebola – these countries are representative of a crucial hotspot where supplies and care are urgently needed.

Because of the dire demand for personnel and equipment, a multitude of countries have stepped in to help the embattled continent of Africa: The United Kingdom, France, and the United States, to name a few.

The calling for support brings forth problems for technologically advanced countries such as the United States, however.

Ebola is easily transmitted through bodily fluids, which is why aid workers have intensive step-by-step procedures to avoid contamination; albeit even with carefully monitored steps the disease is still very dangerous.

Therefore, the likelihood that a health care worker will unknowingly contract the disease increases; the worker infected would subsequently shuttle it into the United States.

“We have to keep our guard up,” said Tom Friedan, director of the Centers for Disease Control and Prevention.

Travelers who have recently traveled from Africa to the United States are the prime targets for screening. 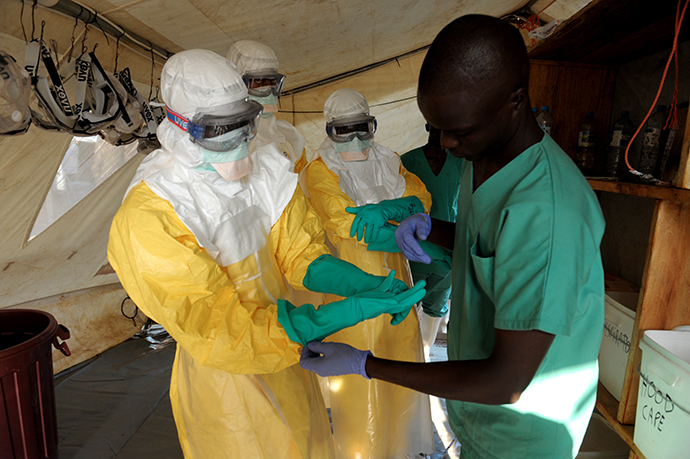 The FCC has also put into place a system that addresses varying levels of risk: A traveler is high risk if he or she had been in contact with bodily fluids; low risk is associated with being around someone with symptoms – an airplane, for instance.

Over the past few days, however, safety precautions have stirred up intense controversy, stemming from the use of quarantines.

Kaci Hickox, a nurse who had returned from West Africa, was quarantined in a hospital located in New Jersey, yet she tested negative for Ebola.

“This is an extreme that is really unacceptable, and I feel like my basic human rights have been violated,” said Hickox, who scorned Chris Christie’s handling of the situation.

This situation brings to light the question of a volunteer’s proposed health condition when he or she returns to the United States. Aid workers like Hickox have wondered how they will be treated when returning home, and if they will be immediately deemed contagious.

“This protective measure is too important to be voluntary,” said Pat Quinn, governor of Illinois.

Due to outrage Chris Christy has released Hickox from the hospital, although questions concerning the state and the national government’s ability to handle the situation are still under scrutiny.