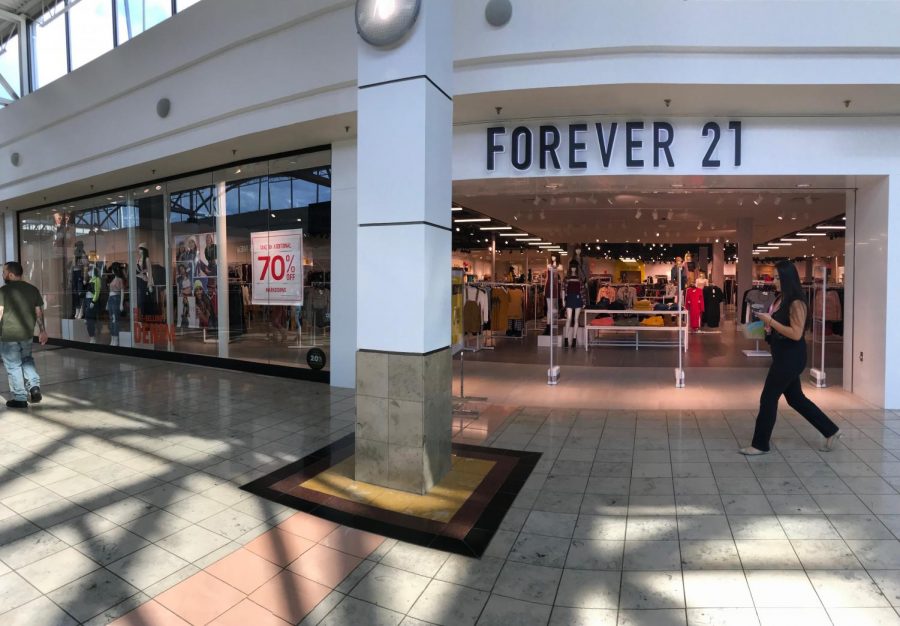 Forever 21 at the Connecticut Post Mall in which local residents of Milford and it’s neighboring cities shop.

In the last 35 years, Forever 21 has become a universal place in which adults and teens choose to expand upon their styles with the current trends. However, with present business struggles, the Forever 21 Incorporation may be filing for bankruptcy. This could mean stores across the country will be in major jeopardy. As well, this leaves shoppers that previously relied on the business  facing individual goodbyes as they leave this brand. As well, it leaves thousands of workers with uncertainty as they may be left without jobs. With that said, the potential closing of Forever 21 stretches beyond the bankruptcy to the individual workers it impacts. However, there have been mixed reports regarding the future of it.

In a USA Today article on Sept. 13, Forever 21 claims they are not filing for bankruptcy. They state, “The reports are inaccurate; Forever 21 is not planning to file for bankruptcy on Sunday,” reports USA today. “Our stores are open and it is our intention to continue to operate the vast majority of U.S. stores, as well as a smaller amount of international stores.” Yet, they proceed to speak on reports believing the company is expected to file for bankruptcy and close some of its 700 stores.

On the other hand, The LA Times reported recently that Forever 21 was getting ready to close at least 100 stores as part of a restructuring plan. Although the official closing of the stores has not been made official, this shows that rumors of this bankruptcy have already been spread among the public due to their large impact.

When the store began to take off in 2015, it soon evolved into a popular place for people to express their fashion. Yet, the styles sold in the current stores have been recently challenged in their quality and look. Students recognize that their peak of shopping at Forever 21 was at a younger age. They see a gradual decline in shopping as the years continue.

Junior Liz Dong says that she has been a shopper at the store since grade seven. She proceeds to describe the store as, “Really trendy. The clothes cater to a younger demographic. I like the clothes, but you can tell the clothing is made out of cheap material.”Because students like Liz are losing more and more interest in the brand, Forever 21 will not be able to grow without their main supporters, teens.

Similarly, a worker at a local Forever 21 franchise, Alex, shares similar feelings towards the brand. After working for the store for two years, she finds that many shoppers find their “basic” closet essentials there. As for herself personally, she believes that the items sold could be “better in terms of design.” From being an employee at the store, Alex has been able to watch the clothing evolve, and said she has witnessed the downfall of the store firsthand.

Likewise, a private shopper at Forever 21, Arianna, has also been a loyal supporter of  the brand earlier on. But, she recalls a different experience with the clothes altogether. Since she began shopping at the store at 13, she says that she would be “heartbroken” if the business was to close because she enjoys the pieces the store has to offer.

Many can recall their past enthusiasm towards the Forever 21 clothing line, but few have positive opinions towards the clothes today.