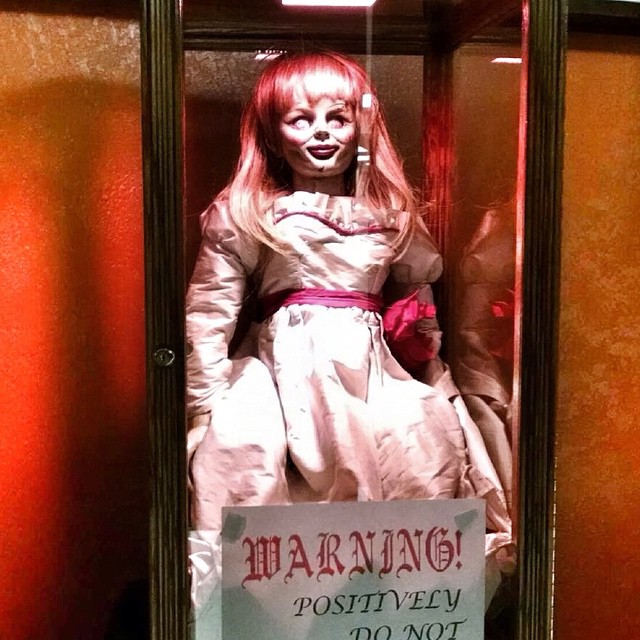 A replica Annabelle doll in a special transparent enclosure. A sign is propped up that says "Warning! Positively Do Not". Photo courtesy of Flickr.

Connecticut is said to have some of the most paranormal activity in the country, and in the town of Monroe, a house keeps a chilling secret.

One of the most well-known stories from movies such as The Conjuring and Annabelle comes from an old raggedy Ann doll. Although the doll doesn’t seem to be threatening, it is the history behind the doll and the tragic events that haunt its owners that make it dangerous.  The doll was first gifted to the owner, Donna Angie, and at first, everything was normal. Throughout her days at the residence, Donna Angie realized that the doll had been moving locations without any human contact. The next day, she locked the doll in her room and later found it on her couch. Upon consulting a medium, Donna found that a 7-year-old girl named Annabelle had been killed in their apartment and had taken a liking to the doll.

Donna sought help from a priest now, and that’s when Ed and Lorraine Warren, who were experienced with paranormal activity, agreed to help. The Warrens speculated that the doll was not possessed by a ghost, but a demon that had its sights set at taking Donna’s soul.

The Warrens would take Annabelle with them, anticipating paranormal activity, took the backroads home. While on their way home, they report having problems with the engine, brakes, and steering until they stopped the car and splashed holy water on the doll.

The Warrens put Annabelle in a holy box, preventing her from attacking any more innocent people. Annabelle eventually became a tourist attraction and was kept relatively safe. One exception was from a man who once banged on the box while visiting the museum. He was quickly escorted out of the museum and later that day, he allegedly died in a motorcycle accident.

Lorraine Warren described an experience she had in her house to her family friend, Katherine Thompson. “She told me a story once after a case, in the days following she was in her bedroom with her dogs and Ed was on the back porch. She stood up from her bed and froze. She couldn’t move her body from her position but was able to move her eyes. She saw her dogs on the floor unable to move too. She said she saw a black figure move in her room and past her, floating by her and around the house. She chanted in her head ‘In the name of Jesus Christ I condemn you to get out of my house and go back where you came from.’

Time went by, feeling like it was longer than it actually was, the figure disappeared, and she was able to move. The dogs moved too as if nothing happened. While collecting herself and her thoughts, Ed came into the house yelling for her saying “you’ll never believe what just happened to me,” he was frozen too on the porch. She explained the same thing that happened to her and she saw a figure.”

Ed Warren died in 2006 and Lorraine recently passed in April of 2019. The museum is currently closed and the future of it is uncertain.