Foran Powderpuff Jukes Out the Competition 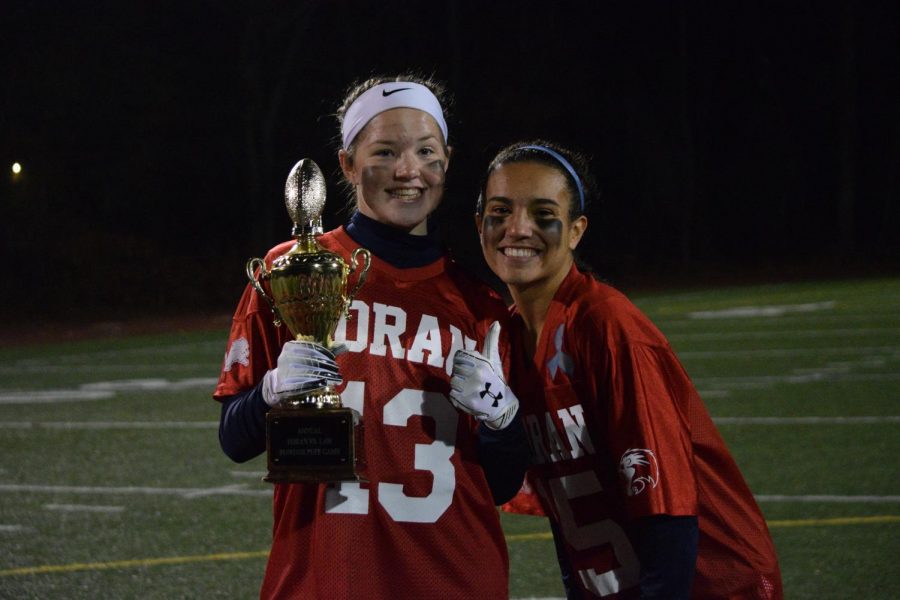 On Tuesday night, the Foran and Law Powderpuff football teams went head to head in a cross-town showdown. The game was held at Vito DeVito Sports Complex on the campus of Joseph A. Foran High School, and the popular game filled the seats on both sides. Although each team played an amazing game, the Foran Lions came out victorious with a shutout score of 21 to 0.

Prior to the game, Powderpuff coach and math teacher, Mrs.Tammi Spose demonstrated her excitement for the game, with this year being her sixth as a coach. According to her, the girls Powderpuff team was eager to play,  and she acknowledged how great of an event the Powderpuff game is every year. “It is definitely a bonding experience for the junior and senior girls on the team,” she said.

The team of upperclassmen from both grades learned to work together and connect in order to make plays on the field. It was made up of 44 junior and senior girls. The team had just nine practices over a two week span to learn new positions and form a game plan for Tuesday under the instruction of coaches Mr. Rob Johnson, Spose, Mr. Jeffrey Raucci, and more.

Hours before the game, senior Ariana Montero expressed her emotions about the game. “[I am] nervous but also really excited. Our team is looking really good this year so I’m excited to see the end result.”

In the first and second quarter, the teams went back and forth, with turnovers on downs or punts ending each team’s offensive drives. Both teams’ secondary defenses looked strong through one half of the game, and after 24 minutes of quiet play, the score still stood at 0 to 0.

However, the second half made up for the lack of action in the first when, just minutes into the third quarter, a 30 yard pass from senior quarterback Mia Tunucci to Montero put the Lions on the 12 yard line. The Lions seized this opportunity in the red zone with a 12 yard slant pass to junior Maddie Debiase to secure the touchdown. Followed by a field goal kick from senior Sara Portoff, the score was 7-0 Lions. Minutes later, a pick six on defense by junior Anna Byers, and another kick by Portoff, put the Lions up by 14. After the pick six, Byers was at a loss for words, obviously filled with adrenaline. “[The interception] felt so good.”

Going back on defense, senior defensive lineman Alexa Mendillo had multiple tackles off of Jonathon Law run attempts. Portoff then made an interception of her own with just over 8 minutes left in the fourth quarter, which was one of two in the game. This set Montero up on offense to run for a long 70 yard rushing touchdown, pushing the score to 21-0.

Foran’s defense stayed strong under multiple run and pass attempts from the Law offense, shutting them out and giving the offense more opportunities to score. After the game, Alexa Mendillo said that it was a huge relief. “It felt like all our hard work paid off.” This year was the second year in a row that the Foran team has won.