Capturing Moments of The AMAs 2019 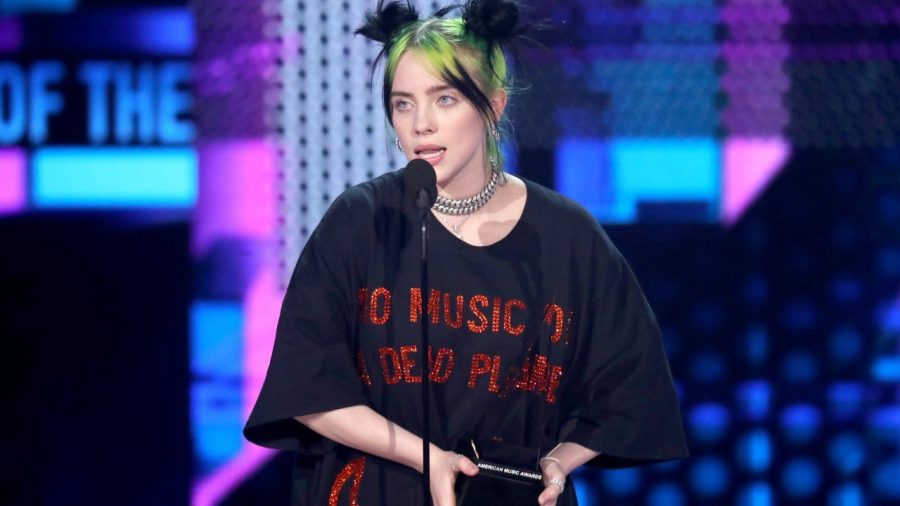 Billie Eillish thanking her brother, her producers, and primarily her fans holding the Best New Artist of the Year award at the AMAs on November 24, 2019. Photo Courtesy of JC Olivera, Getty Images

The American Music Awards 2019 aired live on November 24, 2019, from the Microsoft Theater in Los Angeles, CA at 8 pm EST (Eastern Standard Time) on channel ABC. The first AMAs ceremony took place on February 19, 1974, which marks this show as the 47th annual date. A night full of spectacular performances, lavish fashion, and shiny awards, there were artists from all over the country coming together to celebrate and recognize the newer and more popular songs in the music industry.

For the most part, the AMAs are a widely known ceremony where the winners of each award nomination are determined by fan-votes. Usually taking place before the Grammy Awards by the Recording Academy, this is a time for the fans of singers/songwriters to show them their support and love through actions like voting or attending the ceremony.

The nominees for Artist of the Year were: Drake, Ariana Grande, Halsey, Post Malone, and Taylor Swift.

Taylor Swift had won with the most votes, with her extremely large fan-base putting their all into voting daily online. She also won: Favorite Music Video for “You Need to Calm Down”, Favorite Female Artist – Pop/Rock, Favorite Album – Pop/Rock, and Favorite Artist – Adult Contemporary. Swift won awards in all five categories she was nominated for, making her the most awarded artist since the birth of AMAs while surpassing Michael Jackson. She was also given the Artist of the Decade award, being the first female artist to receive it. Her seventh album “Lovers” handled exceptionally, selling nearly 500,000 copies after just one day of being released on August 23, 2019.

Another star that shone brightly was Billie Eilish, who won Best New Artist of the Year. The other contestants were: Lil Nas X, Lizzo, Luke Combs, and Ella Mai. With her debut album “When We All Fall Asleep, Where Do We Go?” was released on March 29, 2019, collecting over 190,000 online streams from music apps like Spotify, Apple Music, and others. She has intertwined herself and her style of music into the “mainstream” lane, gaining mass amounts of admiration from people all over the world.

Halsey, another well-known pop singer-songwriter, received an award for Favorite Song – Pop/Rock. While thanking everyone and sending all her gratitude, she seemingly criticized The Grammys for being poorly selective with the nominations this year. During her speech, she states, “I grew up watching shows like this and I would sit at home wide-eyed and watch artists in these beautiful gowns and handsome suits, stroll up the stairs to the stage and they would hold up these awards and they were usually gold-plated and shiny and weighted, these metaphors, these trophies that were supposed to be some kind of validation for the soul-crushing and heartache-inducing work that they put into writing a song and bringing it to life. And to be honest with you, I really believed that fairy tale.” (Halsey, AMAs).

This is her way of expressing that awards shows are not at all what they may seem at first, including a lot of behind-the-scenes drama, corruption, and poor treatment towards artists. When we are young, we may find these events fascinating and a dream come true for gaining fame and notability. Music creators have to work so much harder than they display to the world and what she says on that night truly emphasizes their struggles.