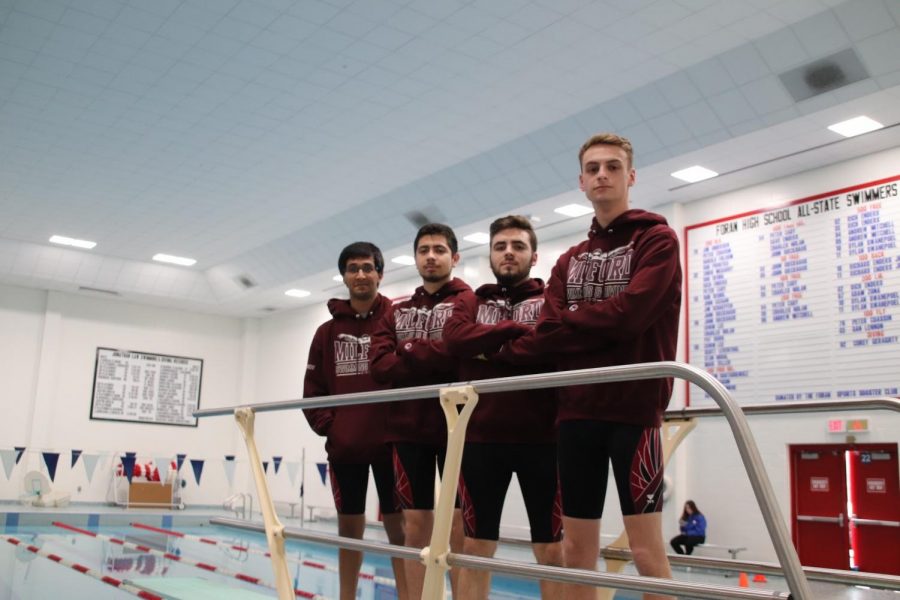 With only four meets left, the season for Milford boys swim and dive is going by fast. According to the students, the combined team, which includes athletes from Jonathan Law High School and Foran High School, has been an effective transition. At their last home meet against West Haven High School and Platt Technical High School, the team pulled a close win 91-87. Captains and seniors Casey Coon, Bruno Sequera, and Lucas Burgard begin to reflect as their senior night and last home meet approaches on Monday, February 10 at 4 pm, facing a combined team with swimmers from New Haven, East Haven, North Branford, and Guilford.

For senior Captain Casey Coon, swimming has been a huge part of his life. With a passion to work hard and spend time with his teammates, Coon looks forward to finishing off the season strong. As Coon mentions, “What I’m going to miss most about swimming is the individual competitiveness that swimming uniquely provides. While it’s a team sport, it always comes down to trying to beat yourself and racing against the clock.”

While saying farewell to seniors can be difficult, juniors, like Justin Goglia, begin stepping up as leaders. Goglia, a student from Jonathan Law, will be a senior next year, and definitely has some big shoes to fill. As Goglia says, “My favorite part about having a combined team is the new people I have met from Foran and the new friendships that have been made. The seniors are encouraging and positive. They make sure you help set up for a meet and have a good attitude. They show how to be good sports.”

This year, the team has been setting goals for themselves. With a great record so far, these goals have definitely pushed the team to do the best they can. According to Goglia, “As of today, we are 4 in 3, which was the meet against West Haven/Platt Tech. This year, I hope to go all state. I also hope to bring my 500 freestyle time down below a 4:47. Last year, I got that time and I was about .4 seconds off of a sectional cut, so I want to get below that.”

To celebrate the accomplishments of seniors from Foran and Jonathan Law, senior night will be at Foran, this Monday, February 10, at 4pm. This year there are four seniors, including Jay Rajani, Bruno Sequera, Casey Coon, and Lucas Burgard. As Coon says, “Our co-op team makes us more competitive in our division and allows us to do a lot more than we would if we were in individual programs. It’d be awesome to see a big turnout at senior night because we’ve been working so hard.”