Veterans Day: A Tribute to Honor our War Heroes 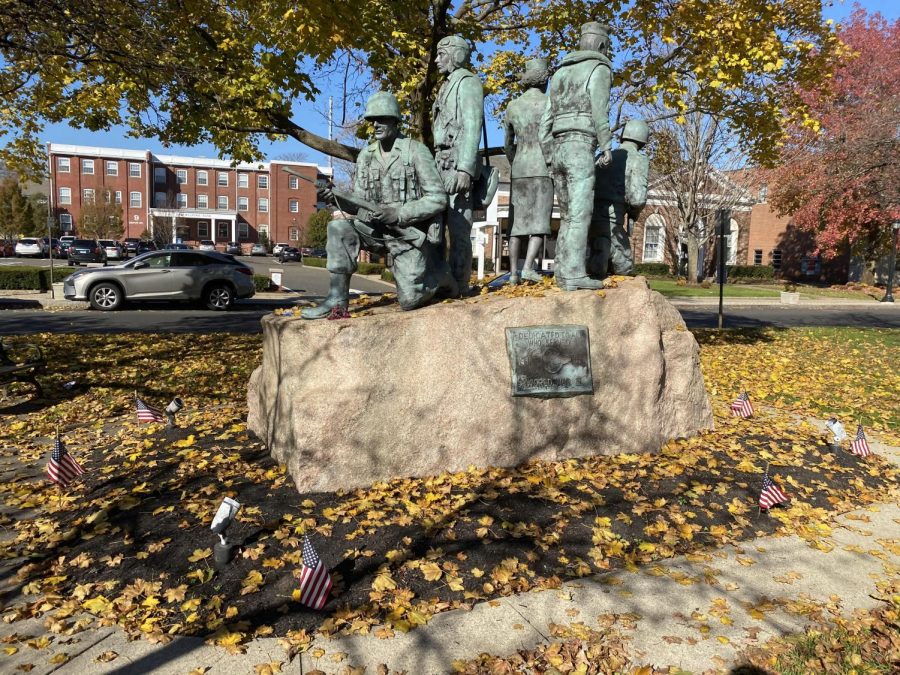 Caption: In Honor of Veterans : Veterans are remembered in Milford. Downtown there is a World War II monument at the Milford Green. Photo courtesy: Daniel Abate, November 9, 2020.

Veterans Day is a federal holiday in the United States that honors military veterans, people who served in the Air Force, and those who have fought and sacrificed themselves for our country. This holiday is recognized on November 11 of each year.

People around the world have united or fought in many wars throughout our history. According to the History Channel, Veterans Day originally called “Armistice Day”, was first celebrated back on November 11, 1919; it marked the first anniversary of the end of World War I and honored all veterans who had fought for their country.

In 1954 after World War II and the Korean War, President Dwight D. Eisenhower and the U.S Congress officially changed the name of the holiday from Armistice Day to Veterans Day. The change would become the day to honor American veterans of all wars throughout history.

According to CNN, some interesting facts about Veterans Day are that there are more than 20 million veterans in the US as of 2020 and about 1.6 of the 20 million are women.

Generally, Veterans Day is honored by hosting parades or ceremonies. These include veterans wearing their uniforms, the American flag being hung up, and a moment of silence to honor those who have died in the line of duty. Writing postcards and spending time with members of the family who are veterans is also a great way to celebrate the holiday.

English teacher Mrs. Lauren O’Keefe, who runs the Veterans Day writing contest and helps with the virtual assembly says, “Veterans Day is an important holiday because as a nation we need to take time to recognize the contributions and sacrifices that veterans have made for our country.”

“I believe that schools are an important place to celebrate Veterans Day because students need to take time to understand the importance of the holiday.” O’Keefe continues, “It would be helpful if students and families would volunteer to organizations that help veterans like Homes for the Brave.”

Owner Julie Johnson, of the local coffee and shake business CappuGino’s shares,“CappuGino’s and Walks with Buddy were able to collect sixty-five bags and five cases of water from the community for Homes for the Brave, a local organization that helps veterans get housing.”

Johnson continues,  It is also important to remember and support our veterans who selflessly fought for our country. We are happy to help in their time of need and honor for their sacrifice for our freedom.”

Science and TechEd teacher Mr. Tom Dillon, a veteran who has served in the Connecticut Army National Guard for five years shares, “I think that veterans day reminds us that freedom isn’t really free and that it was paid for with the blood of the patriots that loved our country and are willing to die for it.”

Dillon continues, “We honor veterans for their patriotism and for their love of our country and are willing to serve and sacrifice for the common good.”

Staff member at Foran, Mr. Paul Grillo, a former Air Force member explains, “Veteran’s Day is so important because it celebrates those former military members who have held the torch of protecting our freedoms and passing it on to those who currently carry it, freedom personified.”

In order to celebrate Veterans Day, Milford Public Schools will engage in a series of lessons centered on the contributions of veterans everywhere.  Students in some schools will visit virtually, with veterans via Google Meet, ask questions, and be able to reflect on this very important day of remembrance. Foran also will be presenting a Veterans Day tribute video in which poems written by students: Emily Besse, Brianna Verdejo, and Skyler Agresti will be read, the choir and band will perform, and information will be shared about noteworthy veterans.

The Veterans Ceremony and Parade Commission will host a virtual Veterans Day ceremony this Sunday at 1:00 pm in Milford, CT. The ceremony will begin with a patriotic performance by the Milford Concert Band at 1:00pm with the formal programming beginning at 2:00pm. The event can be viewed using this Link.

Department head history teacher Mr. Austin Cesare said, “Veterans Day is an extremely important holiday when we show respect to all of those who fought for the freedoms we enjoy.”