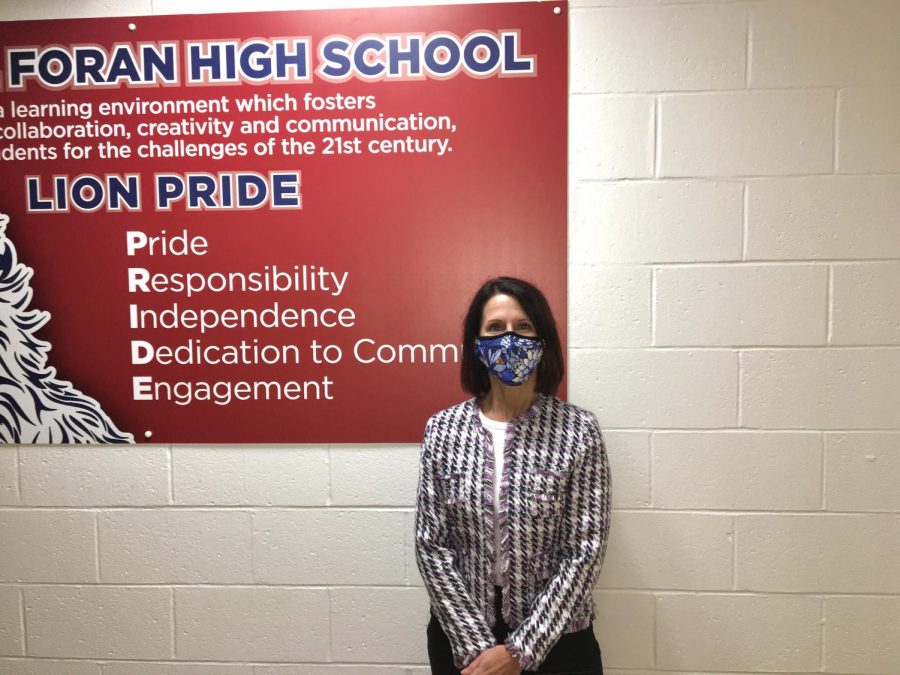 Mrs. Bethany Gilman: Posed outside the Student Life office, where she now spends most of her time. Photo courtesy: Sean Ayoub. November 5, 2020.

Mrs. Bethany Gilman, who has 18 years of experience in education, has recently taken on a new role within the Foran community as assistant principal. Students will no longer find her teaching social studies, but rather making strides as the newest administrator.

Teaching is a major part of Gilman’s life, but that was not always the case. Though her mother worked in education, Gilman never intended to pursue it. Her bachelor’s degree is in political science because she dreamt of working with the FBI.

While attending a PhD program in criminal justice, the opportunity arose to work at a maximum security correctional facility, where she was able to positively impact the residents’ lives as a teacher. This, along with her mother’s advice, led her to teach in public schools starting in 1999.

Before becoming assistant principal, Gilman taught in the social studies department. She primarily taught AP Human Geography, along with AP Macroeconomics and other courses. She has become close friends with and influenced many of her colleagues, including Mr. Frank Tupka.

Tupka says, “She is tremendously driven and cares deeply about students. She has had one of the greatest impacts on my career and teaching style of anyone and I am incredibly proud of her recent promotion to assistant principal.”

In 2016, Gilman re-enrolled in school to advance her career. As she began, however, she received troubling news: she had cancer. She paused her education to focus on her health. After two years of surgeries, radiation, and chemotherapy, Gilman was cancer-free. Rather than dwelling on the negatives, she took time to appreciate the relationships with those around her. Gilman returned to taking classes, and received her administration certification in May 2020, allowing her to take the next step in becoming assistant principal. When a new position arose for the job, she was eager to pursue the opportunity.

The chance came quickly and Gilman says, “I really was excited by the prospect and the challenge and the opportunity, so it came at a very good time and I’m happy that it did.”

Despite the changes Gilman has experienced, her philosophies have largely remained the same. She prioritizes her students and always encourages them to approach her.

Senior, Isabel Blanco, says, “She is such a kind, genuine, and understanding person and has helped me a lot to make sure I am getting the resources I need to succeed.”

Gilman wants to acknowledge the positive impact students have had on her. In her words, “Foran students are some of the nicest students I’ve ever encountered.”

She wants the Foran community to know students will always be her top priority, and her new position will allow her to connect with them on a deeper level.