Tuning in with Turner

The value of music education 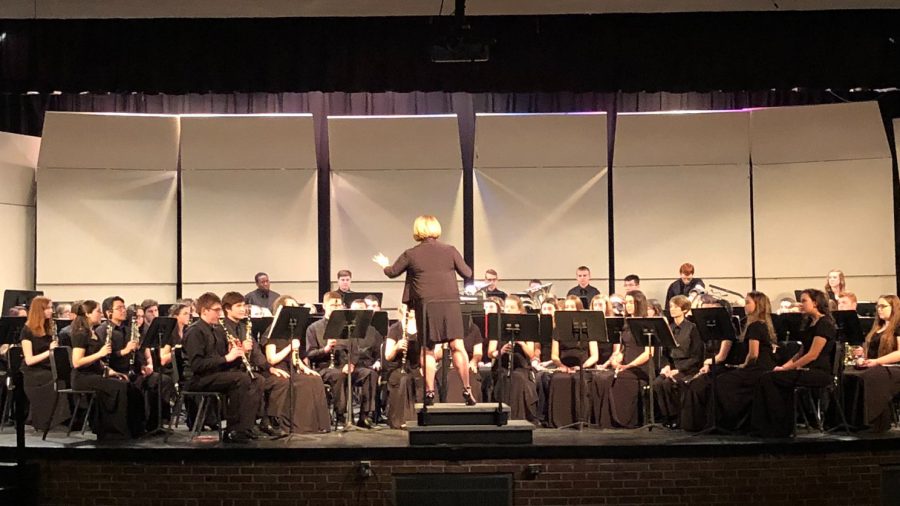 Ms. Jessica Turner, Foran Band Director and mother of two, is celebrating 25 years of teaching, 17 of which have been at Foran. From these years, she has gained not only a vast knowledge of music but an understanding of the value of music education in schools as well.

Growing up in a musical family, Turner’s love for the arts began at a young age. In high school, her father was the band director, and with his support, she knew by her junior year she would study music education in college. Beyond music in school, Turner participated in music camp throughout her academic years. She also taught piano lessons and played with her father’s jazz band.

After high school, Turner attended Case Western Reserve University to study in a joint program with the Cleveland Institute of Music. She later got a master’s degree in music education from the same school.

She describes the plethora of opportunities she had, including a work-study with the director of her college band. In fact, she went on five international concert tours and met people from all different backgrounds, some becoming engineers or doctors. Despite these differences, they all shared a love of music.

In Beachwood, Ohio, Turner began her career teaching middle school and serving as assistant high school band director. She then spent one year in Willington, CT, teaching grades four through eight before moving to Foran. As the head of the music department, she works with other passionate teachers every day.

One of these teachers is Mr. Steven Juhasz, orchestra director, who says, “[Turner] is a great advocate for music education, and that extends to the whole music department.”

He also explains the benefits of music, stating, “Playing in an orchestra also allows students to be on a team akin to those in sports, where they learn together and have experiences… in a group setting that they can’t get anywhere else. They also develop a lifelong love for music, which is the greatest reward.”

The value of music education is the main reason Turner pursued it as a career, as she understands the impact music has on students. She says, “Now more than ever, the arts are essential to people’s mental and spiritual health, and their understanding of humanity and each other… we need music to understand people’s different cultural backgrounds, to deal with our own emotions, to understand history, and to generate hope. Music is an endeavor in problem-solving and creativity, and it is about your ability to work with others to collaborate, create, and react in the moment.”

Turner uses these ideals to inspire students every day, though it may look different during the pandemic. Band students must play 12 feet apart, wearing specialized masks and bell covers over their instruments, the only exception being members of the percussion section. However, Turner will continue to use technology to help students in the classroom but misses being able to perform as an ensemble for an audience.

Despite this, students find incredible comfort in Foran’s music wing, a place where they feel at home. Mark Paine, band president, says, “A great music program like ours allowed me to have the experiences necessary to pursue music outside of school, like writing my own music, transcription, and other things.”

Turner’s impact in the music department goes further than the band. Isabel Blanco, choir president, says, “Ms. Turner has not only taught me so much musically, but she is a kind person. When I joined drama and started taking music at Foran it became my life. I went into [high school] not knowing what I wanted to do, now I’m leaving wanting to be a music teacher myself.”

Students interested in pursuing music professionally must prepare to practice. Though it may be tedious, Turner says that even if it is not their favorite part, students must remain disciplined as it is well worth it.

2020 Foran alum Casey Coon is a music education student at the University of Connecticut. Coon says, “Ms. Turner was one of my biggest inspirations to go into the music education field. She had been one of my mentors since the day I came to Foran, and she pushed my music career to where it is today.”

In these challenging times, Turner wants students to know they can get more involved in music by taking some of the many music courses that Foran offers, several taught by Turner herself. Turner says working with students “has made me have even more conviction that we need [music education].”