A New Look for Student Drivers 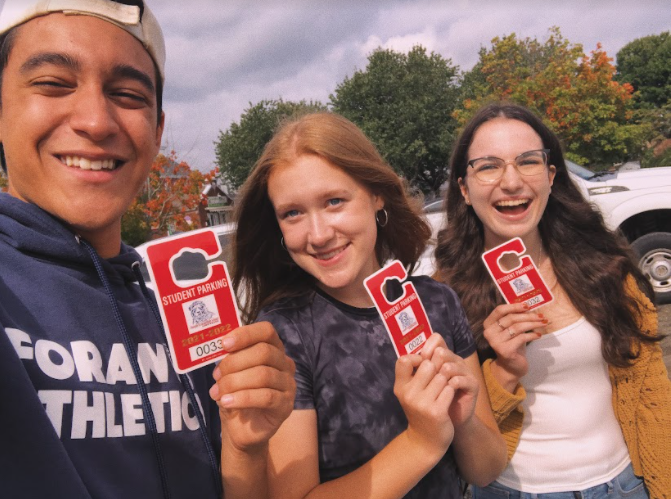 Sudden stops, quick decisions, inexperience. It’s a scary thought, but the reality is there is an inherent risk every time you sit behind the wheel. In an effort to reduce incidents in the school parking lot, students are encouraged to obtain their parking passes as soon as they begin driving to school.

The process of obtaining a parking pass is simple: On September 21, students were sent an email with an attachment to a Google Form.

After answering some questions, including grade, make and model of their car, and license plate information, students were instructed to stop by the security office to pick up their parking pass. As more student drivers become licensed, they will be able to fill out the form and receive their pass as needed.

Senior Delaney Mayville recently received hers and says, “I understand why they’re being implemented, and it’s not really a hindrance to me because I can just leave [the parking pass] on my dashboard.”

Although not used in previous years due to conflicts including various schedule changes and distance-learning, parking passes are not new to Foran.

Security Guard Sal Follo has been issuing passes to students. He says, “[Parking passes] have been used in the past and are really effective. For example, if a student leaves their lights on, they can be informed right away.”

Though students should sign up for a parking pass as soon as possible, student drivers may receive their passes on a rolling basis as they become licensed.

Lexie Carter, a junior, says she has no concerns driving and parking at school, saying, “there may be less traffic in the parking lots because people without the passes won’t drive to school… but I don’t think much will change.”

When it comes to driving, a lack of change is a good thing. Even while parking, it is crucial to pay attention to the space ahead to avoid accidents. If an incident occurs on school property, it must be reported to administration immediately and will be further addressed based on the situation.

To prevent such problems from arising, health teacher Mr. Jeffrey Raucci says, “There should be no distractions while driving. [Your] phone should go on airplane mode or do not disturb. Even when dealing with music from your phone, have it connected to the car or someone sitting in the passenger seat deal with it.”

According to Connecticut State Law, until someone turns 18, they may not use cell phones, hands-free devices, or otherwise while driving. (ct.gov)

Raucci continues, “Multi-tasking while driving is a no-go for everyone, but even more so for newly licensed drivers.”

It may take months for a student driver to feel comfortable driving, whether alone or with others. In the interest of safety for you and your loved ones, erring on the side of caution in all circumstances will help prevent tragedy.

With the implementation of parking passes, Foran High School hopes to make its campus safer for all members of its community.