The Tale of Turkey Day

The History of the Holidays 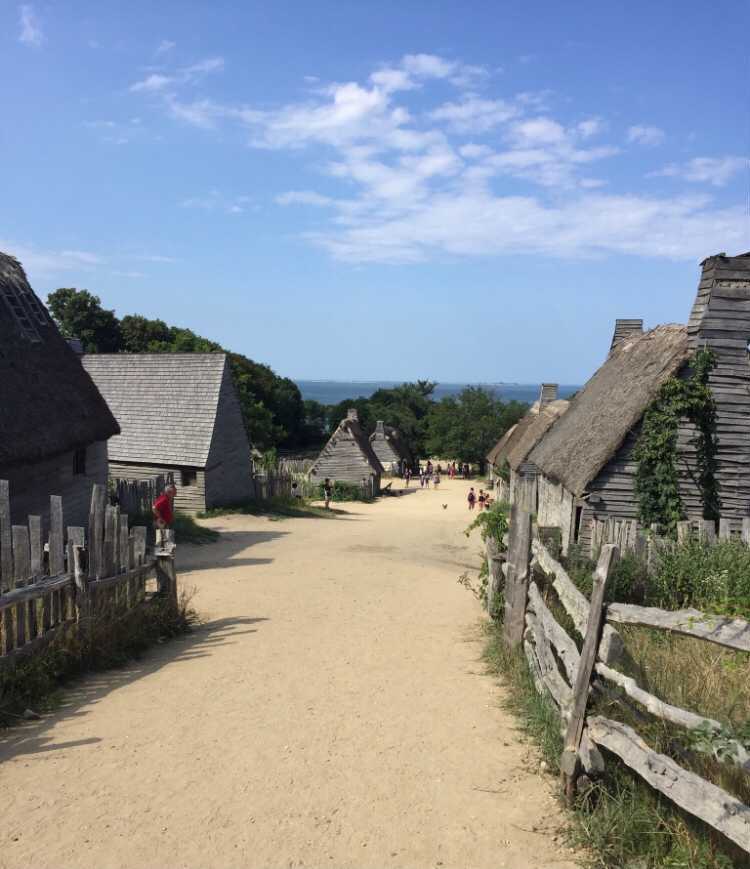 Pilgrims at Plymouth: A look down the main street of the Plimoth Plantation Living History Museum.

While not as widespread around the world as other holidays famous in American culture such as Christmas, Halloween, or Independence Day, it still holds a strong place in many hearts across the nation.

It holds such a strong place that in an article from The Harris Poll (a market research company), it was reported as the second most popular holiday by a vote of 19%, only losing out to Christmas’ 46%. However, despite its popularity, it was only established as a holiday throughout the country during the Civil War, because it was not as popular in the South, as in the North. Even from there, it would take nearly 80 years, until it was moved to the fourth Thursday in November.

Contrary to its late adoption, it is an ancient holiday. The idea of a Thanksgiving dates back to biblical times, and due to this, it came to America in its modern form. In 1620, the Pilgrims, a religious community originally from England, living in practical exile in the Netherlands, made the decision to move to the colony of Virginia; or so they thought. Despite what their calculations said, they did not make it to Virginia, but southeastern Massachusetts.

Two major differences between the regions that had a tremendous influence were the poor soil and cold winters of New England. These factors together, along with the terrible arrival time of December, led to the demise of over half of the Nascent colony.

Their luck turned around, however. After the winter of 1621, life came back to their corner of North America, and it became clear why the land was empty. They found skeletons of people, specifically Patuxet Native Americans, who had been diseased by Europeans. The last Patuxet left after disease swept the area was a man they had met the previous fall, famously known as Squanto.

He had previously been captured, enslaved, and brought to Spain and England, which meant he could speak between both the Wampanoag and the English, which is why he brokered peace between the two sides over the winter.

Later on, an Abenaki man named Samoset, who could similarly speak English, was sent to Plymouth by the Wampanoag sachem (chief) Ousamequin, known as Massasoit. Massasoit was part of the Pokanoket, a subtribe of the Wampanoag, yet ran a confederacy of the greater tribe as a “Great Chief”, otherwise known as a “Massasoit” in the Wampanoag language.

He was sent to find out why they were there, and upon finding out their goals in the new world, the two sides signed a peace treaty in late March of 1621. They would meet for a meal in autumn.

This marked a high point in the relations between both sides, which, within a generation, would break down into King Philip’s War, along with the Pequot War waging in Connecticut (including a march through modern-day downtown Milford). These wars were estimated to have cost 30% of the English population in New England and up to half of the Native population.

Several cities in New England, such as Springfield, Massachusetts were burned down, and several native tribes, most specifically the Pequot would be nearly wiped out entirely, leading to the extremely low Native American population of New England today.

Something well-known about the first Thanksgiving is what was on the dinner plate. Known to be present were venison, corn, fish, and fowl, though it is unclear what this fowl is. While it may have been turkey, it could have been any number of birds present in the Plymouth area.

Canada and some Caribbean countries also celebrate it, though for different reasons than the US.

Senior Delaney Mayville says, “Canadian Thanksgiving, for my family and me, is very similar to American Thanksgiving in that it’s a time to give thanks and show gratitude!”

Thanksgiving has long been a holiday celebrated amongst Americans, from those calling for it during the American Revolution, to its adoption in the Civil War, and widespread celebration by World War Two. It has often held the role as a way to be thankful for our lives and to create an element of peace, just as it did 400 years ago.

While many have called for its abandonment, its role in American culture is powerful and must be remembered. As Thanksgiving seeked to bring peace between the people of America in 1621, it may very well do the same in 2021.